“SA shocked by murders and rapes”…“Spate of women and child murders-a crisis!”

These are just some of the headlines we have seen over the last month in the media, focusing on telling the stories of violence and horror inflicted on women and children.

The immediate reaction for many is one of shock, despair, anger and panic. For many South Africans, their first point of call for expressing these emotions is social media.

News stories are often shared on Facebook and accompanied by comments such as “rape in SA is getting out of hand,” “government is failing us,” etc.

The other reaction is a “knee jerk” one, which begs people to ask, “How did this happen?” Others immediately think, “How can we tackle this crisis?”

But let’s just stop and examine the facts before panicking and throwing around this word “CRISIS”.

A few weeks ago marked the annual Child Protection Week or as I like to call it “a week where children get some focus from both government officials and the media.”

Any crimes committed against children take precedence during this time. Newspapers place these stories on their front pages, bulletins feature these stories at the top- often with sensationalist headlines. Many government departments place it at the top of their agenda and host a week of events where they invite the media to provide coverage, of course.

This leads to ordinary people jumping to the conclusion that these crimes are on the rise. But are they?

After speaking to many experts in the child rights sector, they would most likely say NO. The number of rapes being committed is not increasing. Prove it? Well, that’s easier said than done. It is difficult to conclusively say that rapes are on the rise because police statistics are problematic on its own (but that could be a subject of a whole new blog). Also, there is a challenge of under-reporting due to the nature in which these crimes are handled by police and prosecuted.

So, just to set the record straight….

Rapes are taking place all over the country, every day, but the reports seldom make it into the public domain. The main culprit is the media who choose when and how often to report on these cases. Similarly, officials in government also choose when to make public declarations about rape. They often take action when a case gains traction in the media.

The most recent example is that of Courtney Pieter’s, a three year old girl who went missing for over a week and was later found dead in a shallow grave near her home. The perpetrator was none other than someone she knew. The media coverage of this case and the events surrounding it escalated its national importance. Perhaps it was due to the nature of the crime or perhaps it was because of the timing of events (close to Child Protection Week). Either way it gained enough attention for the President himself to visit the family of Pieter’s and the community, Elsies River. The gestures made by Jacob Zuma outraged some community activists who have actively fought against these crimes for years.

There are times when some rapes don’t make it into the media because they are not “gruesome” enough. They don’t have the shock factor because South Africans have become desensitized.

Shouldn’t we be saying that rape is rape no matter what the circumstances. It is disheartening when a brave victim chooses to speak out and tell their story, only to discover that their story has fallen through the cracks because it wasn’t deemed newsworthy.

While it is important that the media report on cases like Courtney Pieter’s to highlight a culmination of multiple social ills in that community, the media nonetheless has a responsibility to report consistently.

We shouldn’t wait for another Courtney story to be outraged. Nor should we wait for confirmation of a crisis.

One rape is too many.

TheJusticeLady is a writer who wants to give a voice to the voiceless. She is an advocate for the rights of rape survivors. She keeps a close eye on the courts, the media and the role they play in shaping the manner in which society sees rape. 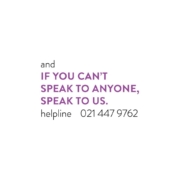 Give Your 67 Minutes to Rape Survivors this Mandela Day

After the Worst has Happened