The Rape Survivors’ Justice Campaign was conceived and established in 2016. We have one aim: the planned and funded rollout of sexual offences courts as promised by the government. This is a big ask and we envision that this long-term advocacy campaign will probably take at least ten years. Since our launch on Women’s Day in 2016 we have made great strides and progress and we will continue to build on this in the future.

Our campaign advocates for the national rollout of sexual offences courts to such an extent that all rape survivors will eventually have access to a specialised court. We believe that these courts should first be established in areas with high rates of reported sexual offences, which is one of the issues that we advocate for in the regulations and our engagement with the Department of Justice.

Locally, we have also chosen to specifically lobby for a sexual offences court to be established in Khayelitsha. Rape Crisis has an office in Khayelitsha and the police stations in the area consistently have some of the highest rates of reported sexual offences in the country without a specialist court to serve the community.

Here are some highlights of our achievements from the past two years:

Initially the Rape Survivors’ Justice Campaign demanded that government rollout sexual offences courts in accordance with their own Blue Print set out in the MATTSO report[1]. However, through engagement with government decision makers in different departments as well as research done by academic institutions, we discovered that there was real concern that the model might very well be unattainable in the country’s current financial position. While the specialised personnel and services are key in reducing secondary trauma and ensuring that complainants continue to testify in a sexual
[1] Ministerial Advisory Task Team on the Adjudication of Sexual Offence Matters. The Report on the Re-Establishment of Sexual Offences Courts. 2013 offences case, the Blue Print also contains extensive and very costly infrastructural requirements. At most Regional Courts in the Country, these are simply not implementable.

We used the opportunity to lobby for the release of the Draft Regulations for Sexual Offences Courts, which will give detailed instructions on achievable requirements. While the regulations are still in draft form, we are pushing for them to contain minimum requirements for services, personnel and infrastructure at sexual offences courts with one goal: to reduce secondary trauma suffered by survivors. This way the objectives of sexual offences courts can be achieved within resource constraints.
The Departments of Justice and Constitutional Development as well as the National Prosecuting Authority includes the rollout of sexual offences courts in their Departments’ Annual Performance Plans (APP) and also report on the achievements of these targets at the end of their financial year. The rollout of sexual offences courts includes a staffing component as well as an infrastructure component and therefore the APPs will speak to these issues.

Hopefully by the end of the year, the regulations will be finalised and then Section 55A of the Criminal Law (Sexual Offences and Related Matters) Amendment Act, 32 of 2007 can come into operation.

The silent rape of sex workers 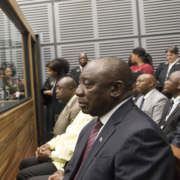 Empowering women to advocate for change in South Africa

SONA Schmona and Other Things in February

Part 4: The Future of Sexual Offences Courts in South Africa

Progress at the Khayelitsha court