I am honoured that Rape Crisis Cape Town have asked me to share my involvement in this area in the form of a blog. So here it goes.. 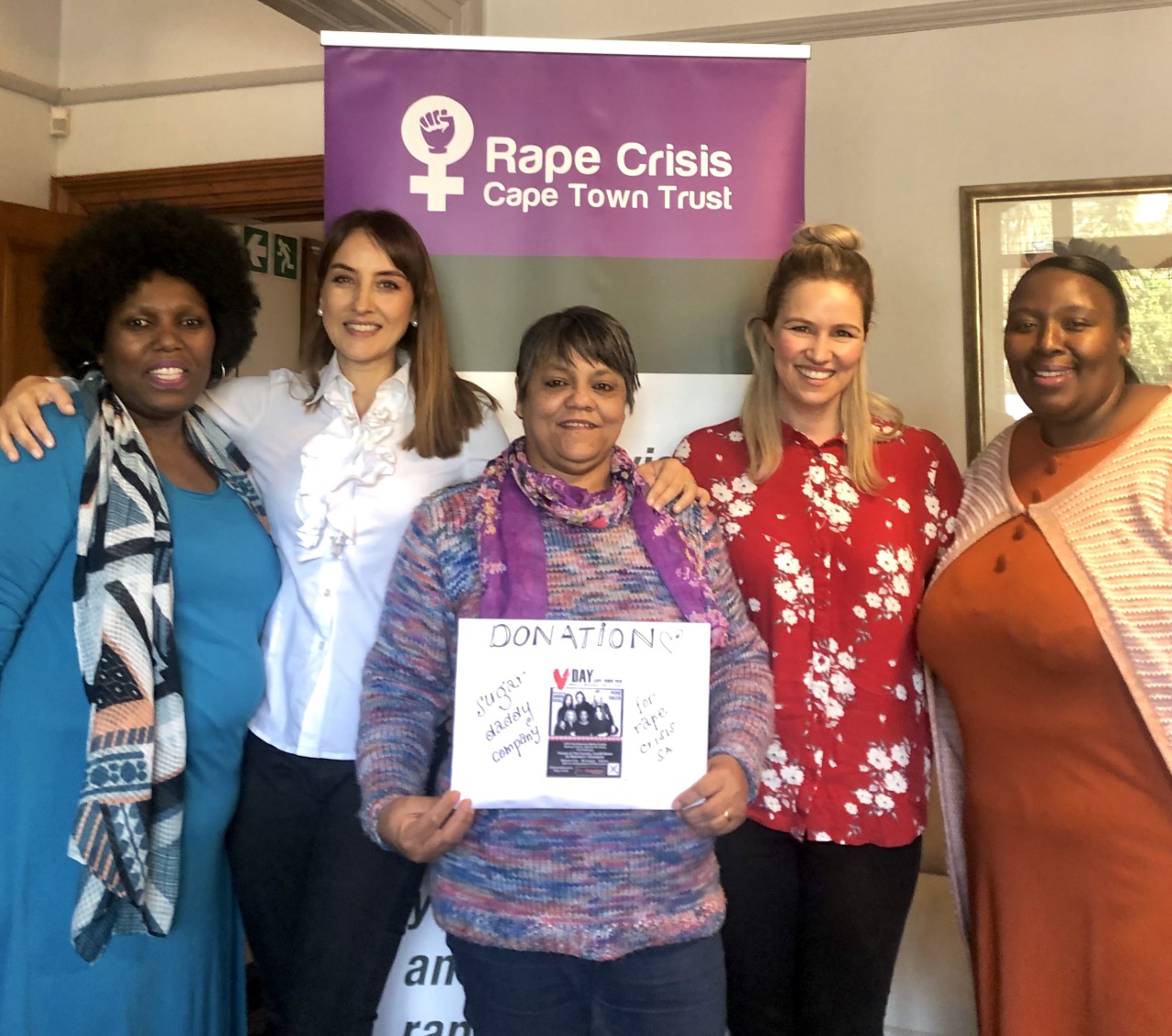 * Trigger Warning – This blog includes a story of Sexual Abuse

In 2015 there was a very moving radio campaign highlighting the rape issue in South Africa. This campaign ran repeatedly and played on my mind. I had only recently found out about a horrific rape story in my own family that had been kept a secret for nearly 20 years. We now know it’s not uncommon for victims to keep such incidences a secret, to self-blame, feel ashamed and to disassociate. Disassociation is when the brain ‘disconnects’ from a traumatic experience and allows one to ‘act like nothing happened’. It is closely linked to the post traumatic stress syndrome.

As a result, after some thought, I decided to sign up our actors collective called ‘The Sugar-daddy Theatre Company’ to an international event called VDAY. Anyone can take part in VDAY, anywhere in the world, it happens every February. The aim is to raise awareness, and to allow women to talk about taboo subjects and to raise funds for charities like Rape Crisis or other institutions that work towards helping victims of violence. VDAY is part of the One Billion Rising grass-roots movement started by Eve Ensler. Eve Ensler is an activist, writer and performer who started a women’s movement in this regard. Her message is simple, ‘Protect our women and children’. Her writing and plays raise awareness around women’s rights as well as gender-based violence.

Her most well known play is ‘The Vagina Monologues’, published and produced in 1996 on Broadway, followed by the West End and has since been performed countless times around the world by international celebrities such as Jane Fonda, Marisa Tomei and Eve Ensler herself. The most famous quote from the play is , ‘If you’re vagina could talk, what would it Say?’ The play in now a classic and shares many incredible stories of real life women and their experiences.

In 2016 we were privileged to host our first VDAY, with our production of ‘The Vagina Monologues’, under the sponsorship of the Inner City Ideas Cartel in Cape Town.
In 2017 the city of Cape Town invited us to hold a benefit performance of ‘The Vagina Monologues’ at the Cape Town Fringe Festival to great acclaim. All VDAY proceeds go to charities such as Rape Crisis, Saartjie Baartman, Mosaic and Father a Nation.
In 2018 and 2019 we went on to produce (several times) a hard hitting theatre piece edited by Eve Ensler and Mollie Doyle, called ‘A memory, A monologue, A rant and A Prayer.’ (MMRP)

This play consists of a collection of monologues and (true) stories contributed by world famous writers such as Edward Albee, Susan Minotaur, Alice Walker, Kathy Najimy to name a few. The idea is to share such stories and diminish the stigma victims may feel about such experiences.

Our MMRP production for Women’s day (South Africa) on the 9th August 2019 was picked up by a journalist, Nomzamo Yuku, who wrote an article on us for a community paper called the People’s Post which reiterated the message ‘Protect our women and children’. This article was in turn picked up by News24 and published nationwide on several platforms.

Shortly after this we found our city in chaos when the news broke of the heinous rape and murder of UCT student, Uyinene Mrwetyana (as well as many many other rape crimes reported daily.) Our actors collective joined the call to march (organized by Fight Back SA), along with approximately twenty thousand other South Africans who took to the streets in protest at this time. I personally felt satisfied, in part, following the marches because they made enough of an impact to action the start of much needed changes in our government.

I do feel strongly, however, that such change can only be done from an attitude of unity and love and willingness to work together. It’s often easier to stand back or to criticize or blame groups of people or politicians or police or lack of justice or fill in the blank _____ but we’ve decided to try and contribute through positive action through theatre and raising awareness and education in this area. We hope to quietly trigger changes in attitudes and dissipate the stigma victims feel around sharing their stories. Ordinary women and men, mothers, fathers, daughters, sons, sisters and brothers have the power to make a difference just with their hearts and minds. (And of course it always feels good to contribute financially too!)

I feel that if we support institutions like Rape Crisis, then there is hope for change, and a safer better future, for the many women (and children) who are raped and murdered daily in our country.

We will continue to host VDAY! With our next event in February “The Vagina Monolgue”

Join us at the Vagina Monologues

Do you have a story to share? We are constantly looking for articles for our blog – if you have a topic you would like to write about let us know. Email Zeenat Hendricks, our communications coordinator zeenat@rapecrisis.org.za to find out more about sharing your stories with us or to sign up for the next writer’s workshop on 30 May 2019.